当前位置：网站首页>Meaning and usage of volatile

Meaning and usage of volatile

volatile The meaning and usage of

I was asked a few days ago volatile This problem , To tell you the truth, I'm right volatile In fact, it is only limited to the level of preventing from being optimized by the compiler , But I don't know what kind of situation it actually needs to be applied to , So yesterday volatile I studied again , Also decided to write it down and record it .

volatile The definition of

volatile Is a feature modifier , It is a keyword on the compiler , Just follow static、const equally . Its ultimate goal is to prevent the instruction to be executed from being optimized by the compiler .volatile The variable is that it can be changed unexpectedly , such , The compiler will not assume the value of this variable .

It doesn't work very miraculously , Take an example ,
EX1：
In a program like this ：

No idea , Last AX_1 The value of is 4, But if I ask you , In this code ,AX_1 Have you ever experienced from 0-4 The change of ？ The answer is not necessarily , Why? ？ Because in different compiler environments , The optimization level of code is different , Even some can be set to no optimization effect . Use Keil As an example , 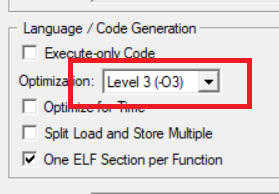 Many optimization levels will directly default to -O3 Level of , The higher the optimization level , The size of the resulting firmware may also be smaller , But when programming , I don't pay attention to many details , Will be directly optimized by the compiler . Of course , Under such conditions ,AX_1 It's impossible, manager 0-4 Changing , It will be omitted directly 0-3 The change of , It arrived directly 4. In fact, I also have a question here , hypothesis AX_1 It's a status register ？ Of course, it is not common to assign values to registers in this way .

EX2:
Emergencies , Such as interruption .
Actually from volatile The italics in the definition of ,“ This variable may be changed unexpectedly ”, Interruption is doing something like this ？ For interrupts , Events can be executed periodically , It can also be executed cyclically , But it's all a sudden treatment , If you suddenly enter the interrupt , Then modify a value , It's actually an unexpected change , Sudden . So for the variables that need to be modified , Use volatile To modify , This problem can be well avoided , Of course, reducing the compiler optimization level may also be achieved , However, such areas that need to be optimized by the compiler have not been optimized , It's a waste of memory , So it's a good thing to write more standardized .